I am being so very bad right now…I have one critical project and one important project I should be doing. 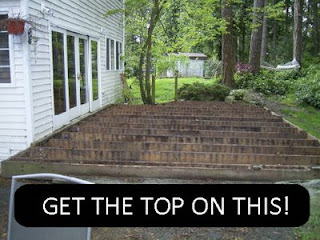 Critical = can’t go to work Monday unless I get it done (I guess I could ride my bicycle).

Important = wife will start asking questions like, “don’t you think you should be working on the deck?” or “that deck isn’t going to build its self” or “do I need to call a handyman to finish the deck” or “the handy man will be here in the morning and I need a check for $$$$$$$$$$$$$$$$$$$..” now that’s the one I have to avoid. Seriously all the other questions are really just, “I better start thinking about finishing the deck” prompts. Now some might say I am like water, I take the route of least resistance. I won’t argue that point today but I am not conceding either. I would rather think about it as directed motivation.

Curious--did you get this done yet?

Oh ye of little faith...
The proper motivation can conquer most any task. A new tool seems to almost always do the trick - one slightly used nail gun hangs in my garage - well it will hang, I should say if I can find a place for it. My garage is a little crowded at the moment. So, thank you very much but yes it is done.