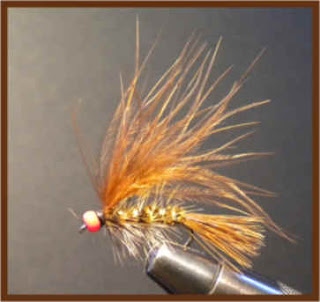 When tying your own flies, rule number one is always tie two, preferably three.
Saturday morning - sitting drinking my coffee the sun was up and mid morning had crested. ‘What am I doing here I could be fishing.’ A half hour later I was packed and headed for the ferry. Across Puget Sound to Whidbey Island, drive 8 miles to Bayview Drive, take a right onto Anderson Avenue and you are almost there. This is a selective fisheries lake, so don’t be bringing any bait. It is single barbless hooks, catch and release only – at least preferred.
Having started out late my expectations were not all that high – but this lake has never skunked me. Well, there was that one time, I only caught a small bass but that’s the closest to leaving the lake without ripping a lip or two.
Fly fisherman that tie their own flies seem to be unable to keep themselves from adapting a pattern just so they can call it their own. If they are asked what they are using they can just revert back to the original and call out, “Woolly Bugger, black, number 8.”
My hand wraps around the cork grip as I begin stripping out line. A backward flick of the wrist starts the line into action 12:00 and then 10:00, slow and easy, each rotation sending the fly further, the fly sings its song as it sails over head and then out over the glassy sheen it sails. A small ripple can be seen where it makes its entrance for act one. My fins move the pontoon boat back just a bit as more line is released. Focusing on the line and motionless for a full slow ten count I let the weighted line do its work. Then strip- wait, strip - wait, repeating the action, the fly begins to make its way back up from the bottom. Twenty more feet, strip, wait, strip, and abruptly the rod tip dips down hard into the wet, a flip of the wrist for the set and the fish is now stripping out line. Keeping even pressure on the line and rod tip, the stripped line flies through the eyelets from whence it came. In less than a few seconds the line is still stripping out but now from the reel. I can see the backing coming up fast.
This is repeated over and over until when removing the fly from this last 18 inch rainbow I notice the gold tinsel had broken loose and unraveled. I clipped it off and cast it out again, nothing. Now the saddle hackle had unraveled; I clipped it off and sent it back out for act three. Apparent it was time to change flies. It was my only brown so I switched to black. That gave me nothing. Not discouraged I switched to green, hmmm still nothing. The next two hours was spent trying different flies but my work yielded nothing. See, that is why you always tie two! D’OH!
Just so you know I now have four tied up and ready for my next trip – A bit late Grayquill!

Four!! You surely know how to get the attention of the fish. Maybe you will succeed.

BTW, There is an award waiting for you at my blog.

Oh, Grayquill, you should tye at least six when you tye a fly. One to loose - one to save as a pattern - one to wear out by catching 20 fish and three to give away to me when I find you. I have to pull my boat out this next Saturday for the season. "Hard" water is on its way and I do not want to have to chop it out of the ice like I have done three times in my life!!!! We have to get together to fish.

n again i have missed out some posts from u...u r one prolific writer aren't u?
dead busy at work...now sitting n reading ur posts at 2am

The Survivor: I always succeed (except when I don’t). What this deal with this Award -Tag…You are very funny. This reminds me of the time I got to go visit my cousins and ended up hoeing a bean field. Thanks….

Bill S. It is a different world where you live. I often go fishing between the week of Dec 26 and Jan 1. It might snow but the water is still in the mid 40’s, and my feet don’t get numb for at least two hours. The fishing is usually pretty good. I will take you up on that invitation someday.

Blunt Edges: Are you at work at 2:00 am or just not asleep? I guess it could be both. Btw – it is scare them out of their fins – that’s a good one. I think I will steal it.

Been there done that. The tie them all at least once phase is now past here. Now it the make a bunch of the tried a true phase.

Troutbirder: My tried and true are a small group. That tells me I need to fish more.
Thanks for stopping by.

This one felt better than 'The Old Man and the Sea' :D ..Hey I am not calling you 'old man' , okay? you are younger than my Papa :-) Somehow I was reminded of that book when I read this :-)

What a good yarn you spin; I felt like I was right there while reading this tale. I also enjoyed your wry, thought-provoking reflections on thinking and death from previous posts. Thanks for your chronicles.

Anita: That is an awful big compliment - thank you. Younger than your Papa? I bet not by much.

Mary: Thank you and taking the time to give me a comment or two - I is appreciated.

had come back at 12am...then thought i'll check out what all my blogger pals r upto! ended up reading till 3...n had a terrible headache the next day in office! :(

Blunt Edges: I think you need a wife to regulate you.