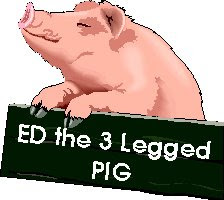 Years ago while goose hunting, my friend Roy and I came upon a farm that had a field filled with geese gleaning the leftovers. Roy being the much more assertive sales type drove right straight up to the farmer’s house to see about permission. Greeting us was a three legged dog barking like crazy and a three legged pig just lying in the sun. The oddity of it all was indeed unusual.
The farmer’s wife soon came out to see what the ruckus was about. After a quick greeting, and while Roy was making our request, the three legged dog stopped his barking and came over for a smelling. His laughing face was full of wet licks as I held out my hand for him to smell. Country folks are usually so nice I didn’t know country dogs matched their owner’s hospitality.
Now rule number one in sales is once the sale is closed – stop selling. I groaned as Roy continued on. “I see your dog is missing a leg; how did that happen?”
“Oh, Sheila is our hero. Several years back we had a house fire. It came during the night when Sam and I were asleep. Sheila is an outside dog and in an effort to wake us up she jumped through the kitchen window. That jump cut up her leg real bad but she made it up the stairs barking, whining, and woke us up – saved our lives she did. My husband Sam stitched her up but her front leg got infected. Normally we would just put a dog like that down. But Sheila saved our lives and we just couldn’t do it – We felt we owed her. The vet took the leg and Sheila has been three legged ever since.”
“Wow that is an amazing dog. I am glad you saved her.”
Now, my curiosity was peaked after such a story, “So what great feat of valor did your pig do? I see he only has three legs also?”
“Oh…” a long pause, “Sam and I are alone and we don’t really eat much so we just figured it would be better to not butcher Ed all at once.”
I looked at Roy and gave him the nod that we should skaddle and we did. The hunting was great. A year later in late October we stop by to check on Sheila and Ed. Sheila was there but I guessed since butchering time had passed Ed sat in the freezer. The hunting was still great and Sheila still had her great wet kisses. We never talked to Sam or his wife about Ed again, so we just aren’t really sure about Ed. Roy figured they had to butcher Ed up completely the next year since a two legged pig just wasn’t practical. Usually I argue with Roy but I couldn’t argue with that.
When I told this tale to my wife she said I was pulling her leg, hmmm….Homer are telling lies again?

Wonderful story. I had thought the pig might be a piece meal butcher. At least he bought some time.
Great about that dog. Most farm folks don't hang on to a cripple. They were good people.

A very well written story indeed. I like the way it went.. god flow.. And lucky pig :P

That couple's name didn't happen to be Dahmer, did it?

Arkansas Patti: Imaginary people can be made out to be good or bad. And, I agree with you totally the pig needed more time.

Riddhi: Thank you for the compliment – I always love flowers.

Dianne: I am with you, I will take bacon every time over dog meat.

Betty: Ha Ha – I wouldn’t be hanging out with any Dahmer types – but I never really thought about out it. Now I am worried.

After I read this... I tried... for a day to imagine a pig with crutches... I failed.... and I understand why they killed the poor animal :-)

That would be one pig that wouldn't have complained while it was being killed!

And I guess I too will take bacon over dog-meat anyday anytime!

Blunt edges: We will never know for sure.

I'd rather have bacon over dog meat as well.

Ma Fat Woman: Let's have a barbecue or better yet a pig roast - I'll dig the hole you provide the pig

I watched Babe just yesterday. If Babe weren't lucky he would have been this farmer couple's pig!

thethoughtfultrain: I don't think I have ever seen that movie. I'm glad Babe's lucky.