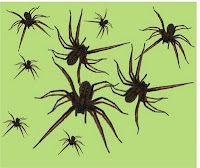 Yesterday I did some pressure washing on my house.  I hate painting so years ago I had vinyl siding installed. What I did not know, vinyl siding builds up static electricity much like when a person who still has hair runs a comb through his nest. As a result dust is attracted to the vinyl. I don’t have to paint but I do have to wash.
While washing it seemed spiders were everywhere. Mostly those big brown ones with giant hairy legs – that tells you a lot – I suppose all spiders seem big, brown and hairy. It doesn’t really matter for the story, so let’s forget I even brought up the whole spider type thing.  As I was pressure washing, I was blasting spiders off the wall left and right, wiping spider webs off my face and it seemed I was continually flicking the creep creatures off my shirt, neck and arms.
The whole spider invasion thing was creeping me out. Have you ever felt that light scampering of spider legs clicking across your skin? It is almost a tickle but not really, it is a one of a kind sensation. Well, I had now moved well past itching and now was firmly planted in the world of feeling real and imaginary creepy skitterers dashing across body parts. The trouble with spiders, they are everywhere. You know they are there but you can’t always see them. You just can’t be sure if one is hiding in some crease or fold of your clothing just waiting to bite you.
Here is the problem, itching and swatting at imaginary hair legged spiders at the top of an economy brand extension ladder is a bad idea. I was constantly fighting the urge to itch. I had to let the real and imaginary critters run up and down my arms, across my neck, and over my ears. I guess the fear of a twenty foot fall was for the most part a sufficient hindrance to keep from itching and swatting because I made it off the ladder safely.
By the time I was finished I was totally soaked. Still itching, I headed straight for the shower. As the water began coursing over my head – take a guess how many spiders I saw take a ride down the drain?
Did you guess three? Two? Four? Well I am here to tell you, you are way wrong. Not a single spider came off me. I just wondered if that question would creep you out. One spider did go flying off me when I peeled off my wet shirt in the wash room but let’s not tell Mrs. Grayquill. She is not like me who doesn’t mind spiders and is never really bothered by the hair creatures. You see, she is afraid of the little monsters. I wouldn’t want her to know that hairy creature are somewhere in her laundry room, alive, lurking, and waiting to pounce.
Are you beginning to itch? Don’t worry they only bite a little.

Ooooh! I don't like spiders at all either. I been bit a few times too! And those brown recluse spiders hurt so much!

Glad you were OK and now you have a nice clean house to boot!

Sometimes, a plan just comes together!

Thanks one Heck of a lot GQ. Now I will be feeling that vague crawling all day. It is like all those bed bug stories on TV these days. Yikes the mind is a powerful thing.
You are a mean man to torment us but a very descriptive one.
By the way, I love vinyl siding and washing trumps painting any day. I just look at my house as a huge car.

Well, that got my day off to an itchy start! You are superb at description, but maybe try something besides spiders???? Hope you have a great "spiderless, itchless" day!

Not a big fan of spiders, but not petrified either. More like you...a swatter and often a stomper. Up at our cottage we have those daddy long leg spiders, now there's some creepy little creatures!
Right now I'm more terrified of bed bugs. When you start closing down major stores in NYC because of the bed bug invasion...it's almost like a bad movie you can't get out of your head.
I wonder if the Bubble Boy is finished with his bubble, I may need it.

You gotta read a blog by Mrs. 4444 on the spider subject. She has posted twice this week on the subject. She posted a vlog today on it complete with a whiteboard as illustration. See http://www.halfpastkissintime.com/

Debra: I have been bitten a few times myself but mostly when I was a kid. I am curious to know what the Father was thinking when he made these little creatures. Sometimes I think he made them just so we know we are not in control. No matter how much one sprays, cleans, and kills the cute little critters in a few weeks they are back in your house and there is not a thing anyone can do about it.

Arkansas Patti: Washing beats painting any day…Yes! A kindred spirit. I keep finding reasons why we should be best friends.

Sylvia: Thanks – the day was spiderless – Yahoo!

42N: I will see if I can get by there. Thanks for stopping by.

Oh my!!!! I am going to give u an award for not freaking out...! I am so scared of spiders...that before I take a shower I run a quick glance through the bathroom to check for one... If there is any, I get someone in the house kill it immediately ... Like Mrs.Grayquill, my Mom is also scared of spiders, and so when I see one, I do not call her for help :D

I had a couple of tarantulas before. They are as big as saucers and very hairy.

I am wondering when to get some new ones.

Step back one and all, I present to you the most elderly version of Spiderman! He may not hop on from one building to another, he may not hang upside down and kiss a not-so-pretty damsel (Yeah Kirsten Dunst falls in that category!), but he sure can...er...hmmm...well, he doesn't do much!

Anita: That has to add a lot of stress. One good thing about where I live there are no poisonous spiders, except the Brown Recluse but I think they are fairly rare. I wish you a spider free year –at least what’s left of it.

Shadowthorne: Why? I just don’t get it.

Amrita: A spider does lack many endearing qualities.

Blunt Edges: You knew that girls name? How many times have you watched Spider Man? Okay, I will have you know, I can still bend over and tie my shoes, so there. The elderly version of Spider Man hanging upside down kissing a damsel might have been a half pleasant thought but of course my mind let me see the horror on the damsels face when she saw how her hero was now an old creepy guy trying to steal kisses and when the fantasy whacked me across the face with her purse, I fell to the ground and reality smacked me again on the head. I gotta go pick the gravel out of my face.

You can keep your spiders. I'd have had a really hard time keeping still under those circumstances. And yes, I'm scratching.. darn you!

Hey Grayquill ...I have translated the non english part of my post in the comment section for u... :-)

Now you know why Mrs. Grayquill keeps spider spry in the mudroom. You really shouldn't complain about it quite so much!