Once a Month Breakfast 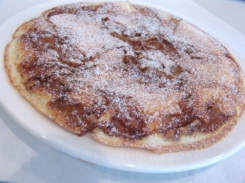 One Saturday of each month is breakfast with the guys.
Coffee, German Apple Pancake with three slice of chedder cheese on the side please. The men who show up for this are varied in education, income levels and interests. All of these guys are from my church, hmmm, can I say, "my church" since I haven't been to church for several months? I will have to think about that. Our breakfast is not at all spiritually motivated, it is just a bunch of guys, some who have both feet into retirement, a few with one foot into retirement, and then the others who wonder what is retirement. Now and then we talk politics. That is the best! We have no disagreements because we all listen to the same right wing talk radio programs (that’s a joke - kinda). Other conversations will center on stories about days gone by or more resent times.
I find it interesting that most of us only have a few stories that are worth telling, so we tend to re-tell them. The group is made up of 50+ers and with the memory's slipping it makes for a great time of re-telling the same great stories over and over. Those of us who still have our memories (or at least partially) laugh like it’s the first time we ever heard the stories, it keeps us bonded.
Here is a mini sampling of a recent conversation:
Son’s last three girl friends have all had the same name - This one he calls Amber3.
Story of when in eighth grade, he walked into the principal’s office the principal slugged him in the jaw knocking him to the floor. (Montana principals 40 years ago)
Retired police officer, now part time school bus driver, recounts working security for an event, in his full dress police uniform, sees a trouble maker student that rides his bus and greets the student by his first name in front of all his “bad” friends. The significance is that pretend tough guys don’t like a police officer calling them by their first names in front of their other would be tough guy friends.
The 1000 mile, Iron Butt, non-stop motorcycle ride – not me, my butt is rather soft.
Finding a twenty dollar bill and giving it back to the wrong person, realizing his mistake he then forks over another twenty bucks of his own money to the right person – a better man than me.
A daughter getting married later that day, the man said, “I went to get some money for breakfast and then I thought, oh yeah, I don’t have any money.” All of us with daughters laughed but we also understood – BTW no one bought him breakfast.
Politics, shooting matches, white collar crime, meeting the son’s new girl friend, meeting the daughters new boy friend, and so goes the once a month Saturday breakfast with a bunch of men who have mostly known each other for 20 plus years.

Hay those are great stories that can definitely stand repeating. Gotta love the guy with the $20 bill story.
Keep enjoying.
Now I have to go get somthing to eat, you made me hungry.

Your previous post too was testimony to the wonderful years of togetherness with spouse... now it is friendship...Not everyone values relationships like you do..! I bet you are a great person!

Every couple of years, I have a "reunion" with three other women I have known since our college days - over forty years. There's nothing like meeting up with old friends. We start talking as though we just saw each other yesterday. Fun times.

Arkansas Patti: Saturday is just around the corner – Can’t wait.

The Survivor: The food helps to! I was trying to think how many of those German Pancakes I have consumed in my day; more than my fair share I guess.

Choco: That’s the perfect food – well some parts of it is perfect. Anything that good has got to have some perfect in it. BTW - Ten years is a long time for your young age.

Anita: Hmmm….I need to re-read those posts. I must have told some whopper lies for you to have that impression. I am definitely not a great person but I have been blessed with some great people who have crossed my way.

Betty: That sounds so great! I hope you get to see them soon. What’s that quote? There’s no friend like an old friend.” Well, it’s something like that.

You guys be careful with listening to all that right wing radio...I overdosed on it once and had to go to the doctor! LOL!

I have a hankering for pancakes now and I don't make them so good. Darn Roadquill, see the trouble you cause me!

I laughed out loud when you said no one bought the guy breakfast. That is true friendship.

Debra: All things in balance - right? I want to hear more about that story!:)

Dianne: True friendship - right...it wasn't my daughter that got married. I have went through that twice...He'll have money again.
I am glad you got a chuckle. Thanks

Wow...wish I could do the same at your age!