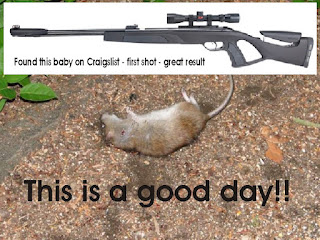 I love your new header! Beautiful colors for the season! And you did face the rat challenge as I would have expected! Hope you enjoy a lovely rat free weekend!!

Oh dear. You're an amusing writer GQ, but we tend to think differently about our furry visitors. When I discovered that we had mice skulking around the back yard feeders, we put out extra seed for them. ;)

When I've suggested putting up bird feeders, my hubby's objection is that it might attract unwanted rodents. It looks as if he might have a valid point.

YeeHaw...now I'm looking for one of those sweet guns...
Glad your back...loved your hunting tale!

Sylvia: If you only knew the truth about my blog’s new look. I was playing around one day – just trying to get an idea and suddenly everything was messed up. It took me hours just to get something that wasn’t too painful to look at. What you see is a pure accident. But, thanks for liking it. I hope all is well with you!

Hilary: I have two things to say. First I hope you’ve had your rabbis shot. Second, does Frank own a pellet gun and if so, has he seen these furry critters? Frank is no girrly man and he would not be part of this feeding rats thing unless of course he was getting something much more out of it than the satisfaction of shooting a rat or two. Hmmmm….I wonder what the pay off could be?

Linda: Oh Linda, Linda, Linda….don’t buy into that weak argument. Surely my one experience doesn’t make that a fact. Even if it is a fact, think of the fun you and hubby could have whacking rats.

Brighid: Keep me posted if you find a bargin. Then maybe we can start a new blog together. Maybe we could call it Out West Shooting with Brighid and Grayquill. That has a pretty nice ring to it.

wow thats a lovely hunting tale :D I am scared of rats so I mostly expect others to do that job for me. ;-)

Anita: Hey I'm terrified of rats. Taking a rat out of a rat trap is not a task for the weak of heart. You should see the garb I cover myself with before disposing of a dead rat. You never know it could just be pretending to be dead :-O

'bout time you got back to blogging!
I cannot tell you how much I hate rats, and mice, and snakes, and most all slithery things. I could try to tell you, but that would be a waste of time, and boring. I don't even like them in cartoons.
OK, enough of what I don't like. I do like this post, and that your back, and most of all, that you maned up and got rid of the rodents. Whatever you spent on the new gun was worth it!

I've been somewhat of a slow to blog myself as of late...no excuse as well. Your whole post made me think of the movie "The Christmas Story" with the little guy hoping for a BB gun for Christmas, ha ha. Going to have to go watch it now!

Can he BB gun do racoons? They have taken over our feeders! We have decided not to feed birds till we find a solution. Our cat keeps the mice away bur coons are not her thing. She does not harm birds as they are out of her reach.
Still I doubt with my vision I could do what you achieved.
Love how yo put this together,

House sparrows are my errr enemy. My 12 gauge seemed overkill so the went to a small box trapped. No Daniel Boone here either...:)

Sounds like a winner to me...
Let's light'm up!