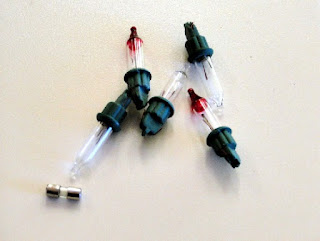 Last week my wife came home with a nice Levi Strauss insulated flannel shirt jacket, just my size. NICE! Of course it came from a second hand store, why wouldn’t it? This new addition to my wardrobe had in one of the pockets a left over remnant from the previous owner. NO! It was nothing gross. Why did your mind go there? It was just some spare light bulbs from a Christmas tree string.

These light bulbs took my mind to a place it has gone on many occasions after picking up some used item. Who was the previous owner? What were the circumstances that caused him to give up a perfectly good shirt-jacket? I usually assume the guy died. There really is no other logical conclusion. Well there is the, he got divorced and his ex- took everything he owned to the second hand store. By the way Garage Sales are great places to meet really angry women who will almost pay you to take ex-husbands stuff away. One lady (do I dare call her a lady?) told me she was going to receive great pleasure telling her ex that she sold his $800 Craftsman tool set for $25.00 – hey it worked for me. If I hadn’t bought it someone else would have. First come first serve…right? Okay...I just made all that up. I have never been that fortunate but it could happen.

There is one down side to buying used clothing. You have to try it on at some point to be sure it fits. I always feel a little dirty after those experiences. After all, the guy that had it before me is now dead! What did he die from? Am I going to catch that disease now? See how creepy that can be? No one wants to die just for trying on some unfortunates’ left overs.

After I discovered the Christmas tree light bulbs in the pocket I figured it was safe to try on the shirt/jacket. After all, the guy probably fell off his latter putting up Christmas tree lights and broke his neck. I don’t understand why they didn’t just bury him in the jacket that would have been so much easier than dressing him all up in a suit. But, heck if I can benefit from another’s poor judgment – I guess I will.

Several years back I came upon a literal bonanza at a second hand consignment store. I found a couple suits, a couple pair of shoes, and the shoes were double nice. Italian. Soft. Fit my foot like a glove. I had never had such a nice, expensive pair of shoes before. I spent a lot of time trying to figure out how that poor sucker died. I finally concluded he was a gay guy and died of aids. I am pretty sure it was true because straight guys would never dress that nice and gay guys being pretty much like a woman would never give a way his or her shoes unless he was dead. The only flaw in my conclusion was possibly the way he died. One part of me thinks he was hit by a truck and died instantly. If he had a disease that took his life slowly he probably would have found a friend to give his clothes to. The trouble with that logic, the few gay guys I know would never wear something second hand. You see that last sentence assumes gay guys only have gay friends. (Oh Grayquill broaden your horizons.) Who said that?

I am interested in what you think about how the guy died whose Levi jacket I now own. If you’re willing, I would enjoy reading your morbid thoughts.  Just so you know the jacket is being washed. You can all rest easy; your favorite Grayquill will not be catching any disease from that jacket.

Since I retired dozens of years ago, I do most of my personal shopping at Goodwill and have been wearing clothes that belonged to someone else for ages -- haven't caught anything yet! But then I also don't spend any time worrying about it -- just glad to get what I needed at a price I could afford! As for how they died??? Don't guess that makes any difference either, we go when we go. So, enjoy the new jacket and your weekend! Hope everything else is going well!

Must have been electrocution whilst replacing burnt out bulbs.

Nice to see you posting again. :)

My guess is that the guy is still alive and well but has put on so much weight that he can no longer fit into the jacket. At least...that's how most of MY clothes wind up at a second-hand store. :)

Loved Linda's comment above ! I also think he is alive and outgrown it !

Lol...this was a funny post :)
Especially the part where u came to the conclusion that the man's ex wife took all of his things and left him broke! And i kinda think that's the case with this jacket too :)

Maybe a thief stole this jacket and when the police caught up with him and put him in the standard jail house stripes they donated the jacket to a second hand store. Now isn't that better then thinking it came from a dead guy?

I suspect that the guy was a hard worker as the jacket was a "nice Levi Strauss insulated flannel shirt jacket."Most likely an outdoors man as well. The fact that he had christmas tree lights in his pocket speaks volumes to me. Most likely he was/is a family man that cared very much for his family and was/is a man of good character. But that's just my opinion ha ha!

hmmm, I do a lot of shopping at G-Will, it fits my budget...
Now about the jacket... while visiting with a sister in law last fall,(very upscale neighborhood) I hear a loud disagreement...between a husband up on a ladder with christmas lights hanging all over him, and his wife... Haven't seen him since... Guessing she won & you have his jacket...

Ah, maybe that guy just didn't like the feel of the apparel and thought: "This was not meant for me but for someone special" and that is GQ!

GQ, where have you been? Such a long time. Hope all is well with you :)

I figure he got tired of his jacket when spring came and forgot to check the pocket before trading it in at the second hand shop for an update a spring version.
It's a good way to work a wardrobe on a budget. And way less morbid.